Ada Wong is the pseudonym of an otherwise-unnamed red-clad, secret agent of Chinese heritage. Initially a private agent, Ada was drawn into the intrigue and treachery that is the corporate world when she was recruited by a rival company to participate in their activities against their primary rival, Umbrella, and later moved to another.

Straight out of Russia, this beautiful cosplay is brought to you by the stunningly gorgeous BeataVargas Cosplay. We are hoping to get a bio on her soon, but meanwhile, check out this gallery of her Ada Wong Cosplay! “Yes, but nobody remembered to roll out my red carpet.” A good word to describe Ada would be duplicitous. No one’s really sure what side she’s on, and when asked by Helena if she was trustworthy, Leon admits that it was “not an easy question to answer.” Ada has a sarcastic sense of humor and constantly maintains a cool, calm, and collected demeanor, being rarely startled or shaken by anything. However, it’s not that Ada is incapable of kindness or compassion. During the Lanshiang incident, she put aside her current objectives to help Jake and Sherry fight off the Ubistvo. And, she stopped to help several innocent civilians fight off zombies while on her way to the Quad Tower.

Furthermore, she shares a complex relationship with Leon. She developed a romantic bond with him in Raccoon City and since then has often gone out of her way to protect him. She even defied direct orders from her superiors to kill him although she often uses him to help further her own goals. She knows Leon would never hurt her and sometimes takes advantage of that. During their brief fight in Eastern Slav Republic they had their weapons pointed directly at each other. But she calmly pointed her grapple gun up to leave the scene without worrying Leon would open fire on her. Ada is known to have an ironic sense of humor. She also has a twisted sense of humor. She joked to Krauser that she had already reported him dead to Wesker. She said she would be punished with a lot of paperwork if he showed up alive when she planned to kill him all along. A trained cunning spy, Ada possesses great intelligence skill. Arguably, she is perhaps the most resourceful survivor in the Resident Evil, as seen in The Umbrella Chronicles. Despite being badly wounded, she somehow managed to fight her way through the ruins of Raccoon City and defeat the heavily armored Tyrant R. As a highly trained assassin, Ada is immensely skilled in hand-to-hand combat. She is skilled in various forms of weaponry, from modern firearms, including handguns, sniper rifles and crossbows, to melee weapons and knives. Despite those skills, Ada favors small arms weapons. She wields handguns and machine pistols with deadly proficiency and precision. She’s able to strike down targets from great distances. Ada Wong Cosplay: Watch This To Get Inside Her Head!

BeataVargas did an amazing job with this Ada Wong Cosplay. She also does a fantastic Kitty Cat Katarina Cosplay from League of Legends.

Thanks again for LIKING and SHARING! 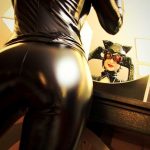 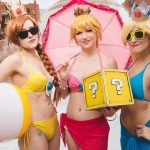