Andrew Dobell is an Author, Illustrator and Photographer based in Surrey in the UK.

A full time professional Photographer, Andrew specializes in composite images that he shoots himself and edits in Photoshop. You can find a lot of amazing work on his website, and if you are into photo editing be sure to check out his YouTube channel for great Photoshop tutorials. And of course, connect with him socially on Facebook.

Article cover image is ‘The New Prometheus’ which is the cover of the first book in Andrew’s Cyberpunk Series – a world ruled by faceless, uncaring mega corporations, Frankie, a young woman who has rejected being cyberized, just wants to make a difference by helping the victims of the cybernetic revolution to fix their ailing prosthetics in the slums of neo-London. Learn more about his Cyberpunk series and get his prequel for free when you sign-up for his mailing list.

The Prometheus Gambit – This is the cover to book 2 in Andrew’s Cyberpunk Series. “When I’m pressed about what it is that I do, the best answer I can give is that I like to tell stories.” Bat Her Up – Kirk Reay as Batman, Mike Clarke as The Joker, and Katie Byrne as Harley. 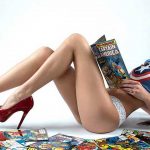 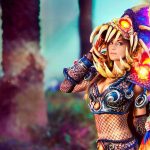