Vall is a Brazilian graphic designer, model and cosplayer. Follow her on Facebook where you can see lots of her great work. Check out this amazing cosplay and be sure to read all about Black Canary at the bottom! Black Canary is a Dc Comics superheroine who debuted in Flash Comics #86 (August 1947). One of DC’s earliest super-heroines, Black Canary has appeared in many team-up titles including Justice Society of America and Justice League of America. Since the late 1960s, the she’s has been paired with archer superhero the Green Arrow, professionally and romantically.

At her Golden Age debut, Black Canary was the alter ego of Dinah Drake and participated in crime-fighting adventures with her love interest (and eventual husband), Gotham City detective Larry Lance. Initially, the character was a hand-to-hand fighter without superpowers who often posed as a criminal to infiltrate criminal gangs. Later stories depicted her as a world-class martial artist with a superpower: the “Canary Cry”, a high-powered sonic scream which could shatter objects and incapacitate enemies (even ones powerful enough to kill Kryptonians such as Superman). When DC Comics adjusted its continuity, Black Canary was established as two separate entities: mother and daughter, Dinah Drake-Lance and Dinah Laurel Lance. Stories since the Silver Age have focused on the younger Black Canary, ascribing her superhuman abilities to a genetic mutation.

Black Canary has been adapted into various media, including animated films, video games, and both live-action and animated television series, featuring as a main or recurring character in the shows Birds of Prey, Justice League Unlimited, Smallville, Batman: The Brave and the Bold, Young Justice and Arrow. The character is ranked the 21st-greatest comic book character of all time by Wizard, and IGN rated her its 11th greatest all-time comic book hero. She was number 6 on Comics Buyer’s Guide’s “100 Sexiest Women in Comics” list.

(via Wikia) Black Canary is a superhero vigilante who fights crime using martial arts and a sonic scream attack. She is one of the greatest fighters in the DC Universe, and also a strong tactical mind. Her costume is an attractive black outfit with fishnet stockings and blonde hair, and she is usually seen riding her motorcycle. There have been two Canaries to share the legacy. Dinah Drake was the original during World War II and the Golden Age of heroes. Her daughter Dinah Lance would take the position during the Silver Agewhen she grew old enough. Green Arrow fights alongside her most often as they are romantically involved. She has been a member of the Justice Society, the Justice League, Team Arrow and the Birds of Prey. Black Canary was created by Robert Kanigher and Carmine Infantino, first appearing in Flash Comics #86. (1947) Her more recognizable daughter was introduced by Roy Thomas in Justice League of America #220. (1983)

If you liked Black Canary, then you’ll love this unique Harley Quinn by Lyz Brickley 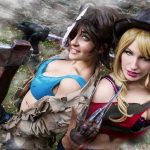 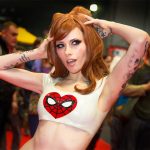