BloodRayne is an action hack and slash movie and video game franchise and cosplayers Fenix Fatalist and Anya iChios, embody every drop of blood spattering gore in this amazing set of photos by photographers Alexander Turchanin and Dreamlyn.

Rayne is the main character of the BloodRayne series. The daughter of the Nazi vampire Kagan and an unnamed human woman, making her a dhampir. Rayne is an agent of the Brimstone Society, a secret organization who works to destroy supernatural evil.

Rayne is an beautiful woman with shoulder-length red hair, fair skin and green eyes. In the first game, her complexion was pale and eyes were light blue.

She has a slim and muscular build. Her signature sexy outfit consists of a red and black corset, skin-tight matching pants, long fingerless gloves, and high-heeled leather boots.

She also wears a choker with a leviathan cross in a red jewel as well as long black ribbons attached by large rings in her hair. Rayne is a complex character. She is intelligent, knowledgeable, witty, seductive – when need be, and extremely confident in her abilities. She’s sarcastic, mostly independent, and somewhat dispassionate, and rarely shows any sign of anger, alarm, annoyance, surprise, or distress.

Thanks to her to her upbringing as an assassin, Rayne is also strong-willed, stubborn, foul-mouthed, tomboyish, tenacious, resourceful, persistent, and enduring – all qualities we love in her!

However, Rayne has an ever-present dark side that is constantly shown throughout the series.

Due to that fact that Rayne was raised to be a powerful vampiric assassin that isn’t supposed to show any signs of weakness to her opponents, she can be cold, aloof, brooding and even callous at times.

Rayne is also bloodthirsty, ruthless, kills without much concern and derives pleasure and fun from death and destruction. Rayne behaves somewhat sadistically, often decapitating and dismembering her opponents and is uncaring towards the victims even though she stated that she “doesn’t approve of senseless killing” in the first game.

Cocky and flirtatious, Rayne frequently converses, taunts, and belittles her opponents before killing them.

Rayne doesn’t care for the human race (she does prefer to be thought of as half human, though), but she has been shown to actually care about a few people. This may be due to losing her loved ones over the years and her dedication to her job.

Rayne is a bloodthirsty American dhampir, born circa 1915-1916. Her mother was raped by her vampire father, Kagan. Kagan later murdered her mother’s entire family so that the only family member Rayne could turn to is him. This wasn’t cruelty, but a policy for all of the dhampir he “created”, possibly so that humans wouldn’t revolt and use the vampire/dhampir weakness of the sun, holy items and water against them.

Circa 1932, she spent her teenage years trying to hunt down and kill her father, to avenge her family. Her search led her to Europe, where she murdered vampires before being apprehended. She claimed that her victims had been vampires, but was disbelieved by the authorities. She quickly managed to escape from them and continue her hunt.

She was recruited into the mysterious Brimstone Society via an invitation. They sent her on missions to eliminate supernatural threats to the world. One of these missions required her to use her vampiric powers against the Nazis, who were on the verge of using magical artifacts to bring the demon Beliar back to life.

BloodRayne 1 – Rayne also learned of a plan to use demonic parasites called ‘Daemites’ against the enemies of the Nazis, after they had been tested on prisoners. Rayne hunted the Daemites to their source, gaining the eye of Beliar in the process. She blew up the base and defeated the high ranking Nazi Mauler in single combat. She traced Jürgen to Germany, and faced off with him and the reborn Beliar. Rayne managed to triumph over the both of them, and was told that her father had been found.

BloodRayne 2 – 60 years after her failed attempt to kill Kagan, Rayne investigated her siblings. Rayne succeeded in killing her father, but unfortunately, the Shroud still lingers over the city and Rayne declares that she and Brimstone will somehow destroy it. At the end, Severin tells Rayne that more vampire overlords will come after Rayne and Brimstone Society makes base in the city, killing the remaining demons and rescuing any survivors. Ending with Rayne saying: “These next few years are going to be very interesting.”

Rayne’s signature are her twin blades which were forged from sulfur brimstone hellfire, left behind by demons. Rayne obtained these shortly before joining the Brimstone Society, from an old man named Declan Finney, who was once dhampir himself, as well as a member of the Brimstone Society. The blades themselves are mounted on braces, which are attached to her arms with handle grips on the sides of the blades themselves, the blades are fairly long, and almost double in length while in her Blood Fury state.

Rayne’s steel stiletto heels have conical steel spikes on them so when she kicks an enemy they will be injured by the heels sharp tips. She is equipped with a wrist mounted harpoon, in which she shoots to spear her enemies with, then pull back in order to throw or pull them closer to her.

In the second game, Rayne wields Carpathian Dragons, dual handguns that fuse blood with chemicals in order to make lethal projectiles. They gain their blood-ammunition supply by draining it through large needles from Rayne’s victims and storing the blood in their reservoirs or when empty, drawing it directly from Rayne herself.

As a dhampir, Rayne has superhuman strength, speed, agility, and endurance.

We also have some Fantastic Tracer Cosplay by Fenix Fatalist to share with you.

BloodRayne Cosplay make us want to run out and get some fangs! 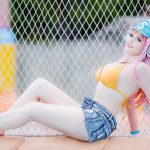 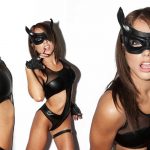