San Diego Comic-Con, which started as a comic book convention with only 300 participants in 1970 has grown into a corporate heavyweight media showcase that draws more than 130,000 attendees. Here are some of the celebrity promotional appearances.

Jason Momoa with his Aquaman trident for the Warner Bros. “Justice League” panel. 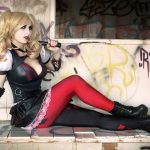