Kakegurui – Compulsive Gambler is a Japanese manga series created in 2014. A television anime adaptation aired in Japan this year. Licensed by Netflix, they announced recently that Kakegurui will premiere outside of Japan in 2018. Hyakkaou Private Academy houses the most wealthy and privileged students of Japan, with many future leaders and professionals graduating from the school. In this school, the student hierarchy is determined by a series of games in which students bet their fortunes against one-another, and those in debt become slaves to the whims of those who hold their money. One day, a new student appears, one who gambles for the thrill of it, who actively begins to disrupt the hierarchy of the school while the student council tries to find ways to shut her down. The main character of Kakegurui, Yumeko is a new transfer student at Hyakkaō Academy who shakes things up by engaging in an increasingly risky series of gambles that put herself and her money on the line. Rather than aiming for the victory, Yumeko gets a thrill out of the mere act of gambling. She quickly figures out ways that the games are being manipulated in her opponent’s’ favor and she can more often than not turn the tables on her foes. “The only one who can decide your worth.. is you.” – Yumeko “If you want to earn something, you need to reach out for it.” – Yumeko “To make your ambitions come true, you have to take risks. The larger the ambition the greater the risk.” – Yumeko More: This Ahri and D.Va Mash-Up by Hane Ame is Insanely Gorgeous

“So make your choice. Live in peace as a wannabe or risk losing it all to reach the very top. You’re the one who needs to decide.” – Yumeko

Be sure to follow Hane Ame and LKO Photography! 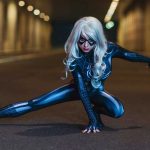