Joanie Brosas Cosplay – Joanie got her start in modeling at a Star Trek convention in 2010. This launched her career and earned her the Trekkie title of “The Orion Slave.” This glamour model has been featured on the covers of Internationally published magazines, calendars and TV such as Tosh.0 and SyFy’s Naked Vegas.

A true nerd at heart, you’ll find her sprawled on the floor of her favorite comic book shop going through boxes of old comics. This Gamer-Nerd-Next-Door loves her all night marathons of Left 4 Dead, Gears of War and overs that we won’t mention, but if you ask her, she’ll spill the beans. Joanie is a bookworm and computer geek but her proudest title is “Trekkie.” Very approachable and down to earth, she loves to meet new friends so don’t be shy, say hi at the next Con and nerd out with her!

You can follow Joanie in all her crazy modeling, nerd convention, and geek girl adventures on Facebook.

Vampirella is a comic book vampire super-heroine who debuted in the black-and-white horror comics magazine Vampirella in September of 1969. Vampirella was ranked 35th in Comics Buyer’s Guide’s “100 Sexiest Women in Comics” list. She also happens to be one of the hottest cosplays.

The Punisher is a Marvel Comics character who made his first appearance in The Amazing Spider-Man #129 in February 1974. Joanie’s Punisher is one bad-ass cosplay.

Tomb Raider is originally an action-adventure video game released in 1996 for Sega Saturn, PlayStation and MS-DOS. Tomb Raider follows the exploits of Lara Croft, an English archaeologist in search of ancient treasures.

“Wild! Green skin, glistening as if oiled. Her fingertips are long gleaming razor-edged scimitars, her hair not unattractive but suggesting a wild animal mane.” – From original Star Trek pilot “The Cage”

Mary Jane “MJ” Watson is a character appearing in Marvel Comics and made her first appearance in The Amazing Spider-Man #25 in June, 1965. She has been the best friend, main love interest and wife of Peter Parker, the alter ego of Spider-Man. Joanie’s MJ is one EPIC copsplay. So what do you think about Joanie Brosas Cosplay? 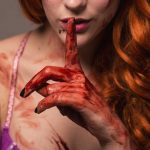 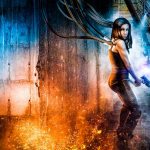