Katyuska Moonfox is a 23 year old cosplayer and game dev student from Brisbane, Australia. Having been at this for a decade now, she’s accumulated an impressive following of well over 1 million social fans. Links and credits at the bottom!

Who Are You? I am a cosplayer who dabbles in modelling when I feel inspired. I like to engage in multiple processes during a creative project and create scenes as opposed to just being shot.

I am a gamer and geek who passions mainly lie with games and anime which has led to my career as a game developer, studying design and programming. I am an artist and overall creative person who likes to learn new ways to leave an impression.

I have been doing cosplay/ modelling professionally for the past 2 years while at university, attending conventions for work and pleasure and running a print shop at various times throughout the past couple of years.

Where did you begin? I have been into gaming and anime since I was a very young child and have been cosplaying for over 10 years now, beginning in 2007 when I was 13 years old. I was just an awkward kid with a huge fixation for Final Fantasy and Kingdom Hearts and the idea of getting to meet people that liked the same thing I did was incredible.

Granted I had no idea how to make costumes and no 13 year old has a concept of time restraints so I pulled a Cloud together in less than a  night.

(You have to see Katyuska’s full Black Cat Photo Set!) 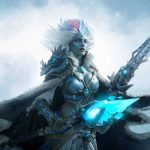