Kitana is a character in the Mortal Kombat fighting game series who made her debut in Mortal Kombat II. (Kitana history via Wikia)

Princess Kitana is 10,000 years old, but is considered young in her realm of Edenia and has the appearance of a young woman. Throughout the years, she rose to great importance; first as the loyal stepdaughter of Shao Kahn, then as his enemy, tearing herself away from his grasp and freeing her home realm of Edenia. She also led an army into Outworld to combat any chance of Shao Kahn rising to power again.

She shared a subtle love interest with Mortal Kombat champion Liu Kang, even after he was murdered by the Deadly Alliance. Though she was loyal to Shao Kahn for most of her life, she aligned herself with the side of good upon learning the truth about her past and her true father, the late King Jerrod.

Even though Kitana is over 10,000 years old, she looks as if she is in her early twenties, at times shown wearing eye makeup. She looks identical to Mileena when both of their masks are on, but when it is off, Mileena’s flawed visage is exposed, as opposed to Kitana’s beautiful face. Kitana’s overall appearance throughout the series has been changed profusely.

In MK 2011, she wears a short, cerulean-colored, cropped halter top, which stops and splits above her naval and has silver trimmings and has an opening in the middle, laced together with crossed strings in a way reminiscent of UMK3. She also wears a matching thong of a similar design with a long flowing loincloth at the front, with embroidered designs on the center panel similar to the subtle designs on her mask and bustier. Kitana also has a coronet, thigh-high boots, silver eardrops, and matching arm gauntlets along with a tiara on her head. Her alternate outfit is a blue-and-silver halter top with matching bikini briefs, as well as a loincloth at the back, knee-high boots, and detached sleeves.

In MKII, as with Mileena and Jade, Kitana wore a simple blue leotard, along with matching knee-high boots, long gloves, and a headband.

In Deadly Alliance, Unchained, Armageddon, and DC Universe, Kitana wore a blue-and-black leotard with thigh-high high-heeled blue-and-black boots as well as a more regal costume featuring a lavender leotard with a very deep V-neck, exposing her cleavage even more. She also wears a brown belt, gold ear drops, and lavender, high-heeled thigh-high boots. Also, her hair is now very long, held in place by 3 sections of a ponytail.

In UMK3, Kitana now wears a leotard with added details, the only noticeable differences being the laced chest opening, armlets, ear studs, and a more liberal use of black, while the headband was dropped and her hair was tied in a tight bun. For her first 3D and unmasked appearance in Gold, her face was modeled after Talisa Soto, and she is clad in a modified leotard, with a near-closed chest opening, a gold brooch, and blue ear drops.

Kitana Cosplay continues to be a very popular choice.

Kitana was one of the most popular characters in Mortal Kombat II, and was the character that many fans used because of her combos, which always ended with a fan throw in mid air. During the early production runs of Mortal Kombat II,Kitana became notorious as an unbeatable character, as her “fan lift” move could be done in such a way as to completely immobilize the opponent in the corner of the screen, allowing the player using Kitana to defeat the opponent with a series of uncontested punches. Ed Boon claimed in the trading card for Kitana that it was amazing seeing people doing combos with her that even he hadn’t thought of. Changes were made in later versions of the game to eliminate this, as it tended to unbalance the game. 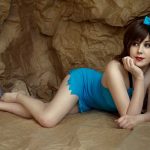 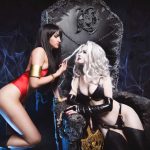