Who YOU gonna call?!

Liz Katz Cosplay – Feisty Little Cosplay Model, Writer, Photographer, Part Time Flake, Gamer, Nerd Girl, Professional Eccentric and Muse, Liz Katz, is half Nerd from her father’s side and half mystical creature from her mother’s but she is 100% awesome to us cosplay fans.

Her passion for gaming began when she was all but a wee 2 year old lass. She sat on her father’s lap to reach the computer and play Dragon’s Lair and McGee games. As someone who suffered from severe social anxiety in school she saw video games and card games as a release and escape. Rather than painting her nails or learning how to braid her hair, she would compete in Magic the Gathering matches. Also, she built theme parks in Roller Coaster Tycoon, saved the world from mutant tentacles, battled Sephiroth and discovered she was a child of Bhaal. Then traveled through various planes of existence to learn what can change the nature of a man, and trained Pokemon into the late hours of the night.

Liz was content in her virtual world and really didn’t have much of a social life as a child outside of her small group of friends. Even though her mom would make fun of games and call them “dorky” she too spent many, many hours kicking butt in the dungeons and catacombs.

Before conventions became the phenomenon they are today, she had quite a few experiences at cons at a young age. Her father would take her to conventions throughout the north east (game conventions, comic cons, computer shows, Magic the Gathering tournaments, miniature war game conventions). Some of her fondest memories of her dad growing up were on these adventures.

By her teen years she began to realize, most people were not like her. She started to embrace that which made her different and would often wear prosthetic ears and dress up for school as a fairy or elf. Some days she’d come up with characters to be and would go in and out of character (much to her mothers dismay). No she wasn’t some crazy person with multiple personalities, she was simply a girl who was bored and wanted so much to bring some fun into the otherwise mundane and unpleasant world that was high school. That’s when one of her friends taught her the name of it; cosplay.

As a young adult she had a very hard time just functioning. She was in and out of being homeless and really unsure what direction she wanted to take her life in. She was lost and spiraling down further and further. That was until 2012 when she sat down and told herself she needed a plan and some direction. So she wrote one… and it worked.

She decided to go back to her roots. She was going to be the model she always wanted to be while including her hobbies. She would use social media to promote herself and create a fan base. She decided no one was going to come and “discover her.”  No one was going to hold her hand and help make her into something worthwhile. It was up to her to make something of herself. She took what money she had saved at that moment and put it into advertising. Her advertising campaigns were wildly successful and In a few short years she amassed a fan base of over a million throughout all her social networks.

What separates what she does from what other cosplay models, gamers, and youtubers do is no matter how big or small her fan base has been her biggest focus has always been on communication. She strives to and enjoys communicating with her fans, not just as a group but on a more personal level in the comment sections of her pages. Liz never just makes a post without following up in the comments to talk with her fans. She feels this is what gives a sense of community, trust, and intimacy (no not that kind!) to her online presence that many other big name personalities do not have. She see’s her followers as humans (not numbers) and sincerely cares about many of them, and she in return is very real back. Liz feels cosplay as an art form isn’t merely the costume itself. For her it goes beyond that. It’s a form of self expression. Despite what many might gather from how she presents herself on the internet, she is an introvert. Through costumes and cosplay she really is able to come out of her shell and just have some fun! Hence, Liz Katz Cosplay! 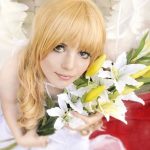