She-Ra is the principal figure of the Princess of Power brand, the heroine alter ego of Princess Adora, and the twin sister of He-Man (Prince Adam). She is featured in the animated series of the same name, an attempt to make a version of the Masters of the Universe cartoon series that would appeal to young girls.

“A female He-Man!!! This is the worst day of my life!”—Skeletor

Scarlet Witch (Wanda Maximoff) is a Marvel Comics character who first appeared in X-Men #4 (March 1964). The character has since starred in two self-titled limited series with husband the Vision, and has historically been depicted as a regular team member of The Avengers. 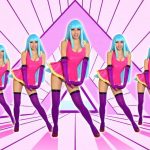