This Poison Cosplay by Juby Headshot from Spain Kicks Ass! Poison was originally conceived as a transgender female thug in Final Fight and part of the game’s Mad Gear Gang. However, due to concerns about reactions from North American audiences to fighting women, both Poison and Roxy were replaced by the male characters “Billy” and “Sid.” After the Final Fight series, she later appeared alongside wrestler Hugo as his manager, with her plans revolving around finding a tag team partner for him and developing their own wrestling organization. Poison’s first appearance in Final Fight featured her and another female character named Roxy as recurring enemies for the player to fight. She was reportedly named after the band Poison by an employee at Capcom. Since the exact nature of Poison’s gender status has been left ambiguous by Capcom, the subject has remained a popular debate amongst fans and gaming media. Electronic Gaming Monthly’s Eric Patterson, described her as being an important character for the trans community and an example of how it is “so awkward when it comes to knowing how to deal with characters who aren’t white, male, and heterosexual” in video games. “I’m not just hotter than you. I also just kicked your ass!” “Like my shoes? I guess you got a good view of them while I was kicking you!” This Poison Cosplay kicked ass, did it not?!!

Juby Headshot is a cosplayer from Spain. Since 2013 she has been bringing her favorite anime, video game and manga characters to life. Juby has always been interested in Japanese culture which led her to get a degree in East Asian Studies. She’s very attracted to strong female characters like Esdeath and Psylocke but she also has a soft spot for characters like Sonico and Hestia. Follow Juby on Facebook or join her on Patreon and support her continuing efforts to create bigger and better costume creations. All photos © Juby Headshot. 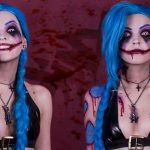 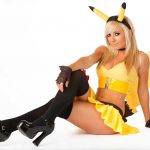