Ronda Rousey cosplayed at Blizzcon and almost nobody recognized her. Check out Layziethesavage on Instagram for more pictures: http://bit.ly/2zjnlX9

Cosplaying as Death Knights, they looked pretty excellent. They also were among the lucky few in the world outside of Blizzard to get their hands-on the just-announced WoW expansion: Battle For Azeroth.

Posted by Brawler on Uproxx on Sunday, November 5, 2017

Rousey spoke with Uproxx at BlizzCon and said she is really excited for the new races in Battle for Azeroth. But she’s even more excited about the new mounts. “I’m a mount collector; mount or die,” she said. She even once spent $1,300 on WoW cards for the chance to get a rare mount but it didn’t work out!

Last year, Rousey spoke about playing WoW with Vin Diesel to relax during the filming of Furious 7. She’s not however, the first celebrity to cosplay at BlizzCon; in 2015, movie star Jamie Lee Curtis walked the show floor as an undead Forsaken character.

Battle For Azeroth was announced at BlizzCon this past weekend. The level cap is raised to 120, and new areas to explore, and there are also new dungeons and raids. There will be new Allied Races for the Alliance and Horde, and a three-player co-op system called Island Expeditions is also included.

Perhaps the biggest WoW news however is the announced World of Warcraft Classic, “Vanilla WoW” servers are coming back that will let you play a version of the game before it received countless updates and expansions. Fans have wanted this but it remains to be seen if going back to the “good old days” will be popular with the newer generations of players.

We are stoked for Vanilla WoW!

Get ready for a trip through time with World of Warcraft Classic!

Posted by World of Warcraft on Friday, November 3, 2017

There’s a lot of celebrity cosplay going on out there, check out these 15 Awesome Celebrity Cosplay Couples for Halloween. 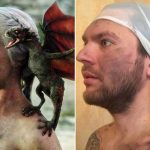 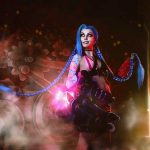