Follow Vavalika on Facebook where she has more fantastic cosplay, after, you’ll want to order some of her gorgeous prints on Etsy!

Princess Leia’s bikini is an iconic costume worn by Carrie Fisher as Princess Leia in the 1983 Star Wars film Return of the Jedi. Costume designer Aggie Guerard Rodgers created the costume along with Nilo Rodis-Jamero.

Rodgers said in 2006 that the costume’s design was inspired by the work of science fiction artist Frank Frazetta, saying “He really loved the female form. The fact that Leia’s costume is such a female sensual costume, I think is terrific.”

Featured only in two scenes, the costume made Carrie Fisher an iconic sex symbol and continues its popularity today as a favorite cosplay for many.

One Wired Magazine editor stated the only reason for the outfit’s fame is “no doubt that the sight of Carrie Fisher in the gold sci-fi swimsuit was burned into the sweaty subconscious of a generation of fanboys hitting puberty in the spring of 1983.” We think Vavalika may spawn a new generation of fans.

Now for the perfect segue from Slave Leia to Poison Ivy… this is great. Well played, Vavalika, well played.

Poison Ivy is a DC Comics villainess and adversary of Batman. The character made her first appearance in Batman #181 in June of 1966. Poison Ivy is one of Batman’s long time enemies and is part of the group of adversaries known as Batman’s rogues gallery.

Poison Ivy’s real name is Pamela Isley, a Gotham City botanist obsessed with plants, ecology, and the environment. A notorious eco-terrorist, she uses plant toxins and mind-controlling pheromones for her criminal pursuits, which are usually aimed at protecting endangered species and the environment.

Poison Ivy typically wears a green one-piece costume covered with leaves and plant vines. In various storylines, Poison Ivy has been a love interest of Batman, and has teamed up with fellow Gotham villains Catwoman and Harley Quinn. She and Harley are besties and allies.

Poison Ivy was ranked 21st in Comics Buyer’s Guide’s “100 Sexiest Women in Comics” list back in 2011 and Vavalika does her justice!

We’ve got some Mesmerizing Poison Ivy Cosplay by Stephanie Michelle that you should definitely check out while you’re here. 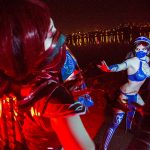 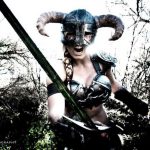