The Very Best Anime on Amazon Prime for Cosplay Inspiration!

Here are the top picks for some good anime and good cosplay inspiration. Make some popcorn, put on your best cat pajamas, get on Amazon’s FREE Trial! and prepare to binge!

A new and deadly breed of covert agents walk the streets. These assassins and spies wield bizarre supernatural powers to carry out the dirty work of others. One among these operatives is more mysterious than the rest – the Black Reaper. His true identity remains unknown, but as his path weaves through the alleys of Tokyo, blood is spilled on both sides of the law. Yu-Gi-Oh! follows the adventures of high school student Yugi, who has a magical secret that comes to life when he plays his favorite card game: ‘Duel Monsters.’

Lucy is a special breed of human referred to as “Diclonius,” born with a short pair of horns and invisible telekinetic hands that lands her as a victim of inhumane scientific experimentation by the government. However, once circumstances present her an opportunity to escape, Lucy, corrupted by the confinement and torture, unleashes a torrent of bloodshed as she escapes her captors. Elfen Lied is based on Lynn Okamoto’s seinen manga series of the same name and premiered while the manga was still in publication. The anime follows the source material through the first 7 volumes, with several alterations to the story, and concludes with an exclusive ending.

A gigantic spaceship crash lands on Earth, foreshadowing the arrival of an alien armada bent on war and destruction. The world unites to unlock the secrets of its alien technology, known as Robotech, to defend the world against impending invasion. The challenges they will face will be greater than anyone could have imagined. Episodes feature remastered video with bonus footage and 5.1 audio mix.

Perfect as  last minute gift or for those who have it all. Some key Prime benefits:

Later adapted into Robotech, Super Dimension Fortress Macross is a Japanese science fiction anime series created by Shoji Kawamori. The show takes place ten years after an alien space ship the size of a city crashed onto South Atalia Island. The space ship was found and reconstructed by humans who turned it into the SDF-1 Macross.

Rin and his twin brother Yukio have been raised by Shiro Fujimoto, an eminent priest. One day, Rin makes a discovery- His biologial father is Satan! As the border between the realms of Humans and Demons is intruded upon by evil, Rin vows to become the ultimate exorcist and defeat his own father, Satan. To hone his skills, Rin enters True Cross Academy to train with other exorcist candidates.

It’s the latter half of the Edo period when cruel thieves feared Heizo Hasegawa, known as “Heizo the Oni”. He is the head of Arson Theft Control.He never tolerates injustice and punishes criminals who violate the three articles of a thief.Surrounded by quirky characters, Heizo rids the injustice that infests the city of Edo.

Brothers Edward and Alphonse Elric’s reckless defiance of alchemy’s Law of Equivalent Exchange resulted in no miraculous reunion with their mother, but a hellish nightmare; half of Ed’s limbs were torn from his body, and Al awoke to discover his young soul transferred to a suit of armor.

Nino sings for one reason only: to be found. Blessed with a beautiful voice, she wishes to reunite with two childhood friends: Momo and Yuzu. Things start to change as she enters her first year of high school.

For a group of high school seniors, a chance reunion with a transfer student will change the course of their final year.

Two priests charged with traveling the world to validate “miracles” find themselves tangled in events filled with deceit. As members of the Assembly of Saints, Robert Nicholas and Kou Hiraga seek the truth behind the supposed works of God.

Yuna Yuki is an ordinary second-year middle school student. She gets up in the morning, goes to classes, participates in club activities, and has fun with her friends. But there is one extraordinary thing about Yuki-she belongs to the “Brave Hero Club.” What does this club do? Who is the mysterious being called “Vertex?” Yuki Yuna and her friends’ story takes place in Year 300, Era of the Gods.

People have created many stories. Joy, sadness, anger, deep emotion. Stories stir up emotion and captivate. However, those emotions are nothing more than the feelings of a spectator. What if the characters in the stories had their own “will”? In their eyes, are we, the creators of the stories, like gods? Revolution for our world. Punishment for the land of the gods. Re:CREATORS. Everyone becomes a Creator.

Within the depths of the Abyss, a girl named Riko stumbles upon a robot who looks like a young boy. Riko and her new friend descend into uncharted territory to unlock its mysteries, but what lies in wait for them in the darkness?

This is the land of Mistarcia where gods and demons walk among mankind.It has been ten years since the world escaped oblivion from Bahamut’s awakening.The new king of man has attacked the shrine of the gods and conquered the demon nation.Demons have been enslaved, and the power of the gods has waned.In a world losing its balance, mankind, gods, and demons clash to find justice.

Remember to grab your 30 DAY FREE TRIAL for Amazon Prime that includes all this good anime and includes Twitch Prime!

Where do you get your inspiration for cosplay? Share and let us know! 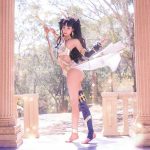 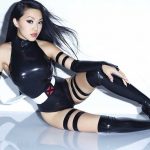