Photo by Photos by Tatiana

“I dig comics, geekery, pop-culture and dress up. So I’ve found a way to turn those passions into not only a hobby but a business.” – Toni Darling

The following interview excerpts first appeared on Cosplay Fanatic.
CF: How did you get into cosplay, who did you portray first and why?
I fell in to cosplay by accident. Jim Miller, a film maker in Mesa AZ invited me to cover conventions as a host of his youtube show Geekssociated Press. I first covered gaming conventions, then comic conventions and it was only a matter of time before I discovered cosplay. Halloween was always my favorite day of the year, and the moment I realized I could dress up all the time and people might actually think its neat, I was hooked. The first costume I made is still my favorite – Thor. Almost three years ago now, I decided to cosplay Thor as a woman, Not Lady Thor or Thor Girl, but my interpretation of what Thor would look like as a woman. (I chose not to go with the Earth X version of female Thor because I thought the costume was atrocious). I chose Thor because I am Scandinavian and I grew up with the legends of Thor and Odin as bedtime stories. I also love the strength of his character and that he is often humbled by humanity. His development as a character over the years has always interested me, and to portray him was an honor both to my heritage and my love of the comic.
CF: What’s the best part of cosplay?
There is something very magical about losing yourself in a costume. You become a different person for a little while, you put on a persona and you can experience your love of that character in a deeper way. To really get in to a character mentally is what I love about it. Ironically about the only form of entertaining I have no interest in is acting, and when I am in costume, I don’t act like the character per se. But I channel that energy and emotion while I am wearing the costume so I think it adds to fans enjoyment and perception of my presence as that character. What fans of cosplay enjoy is seeing someone really personify an icon that they love. Feeling that character from the inside out is the ultimate personification of an icon, but when you mix that energy with your own you can truly give the character life.

CF: If you could be any super hero or villain who would you be and why?
Batman. Because as appealing as super powers are, I like the idea of becoming the best you can be while still being human (it helps when you are super wealthy and can afford super awesome toys of course). I think Batman’s popularity comes from that fact that he is still a human being, no matter what awesome things he accomplishes. In that way he is… almost attainable. He is a legend but he is also a man, and that is inspiring.
CF. If you could meet anyone in the world dead or alive who would it be and what would you say to them?
Coco Chanel. I’d rather not say.

Check out these little girls inspired by Wonder Woman at SDCC 2017.

CF: What’s your favorite sci-fi movie and what captivates you about the plot?
The Matrix. I love the idea of challenging the boundaries of the mind to see the truth and unlocking ones inner potential. Also, anything that involves a grand destiny is always intriguing.
CF. What’s the craziest thing a fan sent you or requested?
I got a unicorn bouquet for my birthday once. That was awesome.
8.4k
SHARES
ShareTweetPin 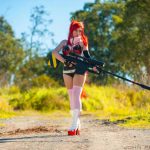 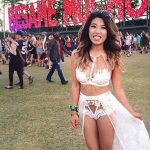