The Victoria’s Secret Fashion Show entertains over 500 million viewers each year with musical performances, famous model castings, and a parade of glittering lingerie. One of the most theatrical elements of the show are the towering Angel wings the models carry as they saunter down the runway. Crafting each wing is a long and arduous process, spearheaded by crafts artisan Marian Hose, who goes by the nickname Killer. Marian started working with Victoria’s Secret in 2009, and has created many of the iconic wings.

[Do not miss the angels video rocking out with Bruno Mars at the bottom!] One pair of wings can take up to 400 hours to craft Marian Hose recently told Teen Vogue. Follow along and find out what it takes to create Victoria’s Secret wings and you’ll be inspired for your next con! MH: After meeting with the design team, we’re assigned wings by the Victoria’s Secret Fashion Show staff. We then go through seven stages. At the first meeting, we blow up designs on a projector with our fit model to make sure that the scale is good. MH: Next, at my studio, I pattern the wings, I build the backpack bases and under-structures and I swatch decorative materials. This year, we used everything from hardware to plastic to feathers and hot fix Swarovski. MH: We do 5-6 fittings per wing. We have the first fitting of actual wing mockups with our fit model, and we solidify all the materials. At the second fitting, we check to make sure the wings don’t bounce and they aren’t getting too heavy. At the third fitting, the design team matches Victoria’s Secret product to the wings. MH: Then, we finally meet the model who will be wearing the wings! We have to make sure the wing works for each girl carrying it. At the final fitting, we correct any problem the model may have, and take pictures to document the outfits. MH: A wing can take anywhere from 30 to 400 hours, depending on how difficult it is. Very few of our wings take 30 hours. MH: Our heaviest wings are the Pink Large Bow Wing, the Secret Angel Fishnet Wing, and the Road Ahead Woven Feather Disc. Each of these wings probably weigh 15 to 18 pounds. Surprisingly, our largest wing in the Dark Angel Section only weighs 12 pounds. It’s completely covered in black feathers. Often times, the jeweled wings weigh the most but this year, we kept them between 1 to 8 pounds. MH: When I think of the iconic Victoria’s Secret Angel, I see white wings because they tie all the different divisions of Victoria’s Secret together through the commercials, the stores and on the runway. Some of my favorite white wings are Behati Prinsloo’s and Adriana Lima’s Snow Wings in 2013 and Miranda Kerr’s silver screen wing in 2012. MH: Sometimes what makes a wing iconic is not just the wing itself, but the amazing model that brings the wing to life! So, I would have to add Adriana Lima’s red Parisian Nights wing because when she opened that section, she owned the stage. Adriana’s Parisian Wing is featured at The Madame Tussaud’s in New York City for that very reason. She may not have wings but Superstar Katy Perry is a Cosplayer at Heart! 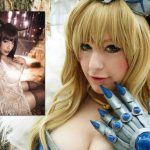